Saved Searches Advanced Search
Our Pop In/Pick Up holds service offers a contact-free way to get your items when they're ready. Learn more >
Print 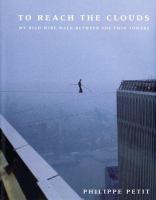 To Reach the Clouds

My High Wire Walk Between the Twin Towers

An artist of the air re-creates his six-year plot to pull off an act of incomparable beauty and imagination One late-summer day, a feat of unimaginable audacity was perpetrated on the twin towers of the World Trade Center. The year was 1974. A hundred thousand people gathered on the ground to watch in awe as twenty-four-year-old high wire artist Philippe Petit made eight crossings between the all-but-completed towers, a quarter mile above the earth, over the course of nearly an hour. Petit's achievement made headlines around the world. Yet few who saw or heard about it realized that it was the fulfillment of a dream he had nurtured for six years, rekindling it each time it was in danger of expiring. His accomplices were a motley crew of foreigners and Americans, who under Petit's direction had conpired, connived, labored, argued, rehearsed, and improvised to make possible an act of unsurpassed aerial artistry. In this visually and verbally stunning book, Petit tells for the first time the dramatic story of this history-making walk, from conception and clandestine planning to the performance and its aftermath. The account draws on Petit's journals, which capture everything from his budgets to his strategies for rigging a high wire in the dead of night between two of the most secure towers in the world. It is animated by photographs taken by two of Petit's collaborators, and by his own wonderfully evocative sketches and unquenchable humor.
Publisher: New York : North Point Press, c2002.
Edition: 1st ed.
ISBN: 9780865476516
0865476519

'Philippe Petit is an artist whose theater is the sky. in his absorbing book, he reveals himself to be equal parts Houdini, Nureyev, and Da Vinci.' Robin Williams.

'It was Philippe Petit who connected the twin towers of the World Trade Center, in an act of beauty and ecstasy.' - Werner Herzog

'What this book celebrates is the refusal to live life at ground level, when alternatives are available to anyone with sufficient energy and imagination ... breathtakingly life affirming.' - Sunday Times

'Reads like a thriller written by a poet' - Newsday

Passionate, breathless and utterly compelling, To Reach the Clouds recounts the day in 1974 when Philippe Petit illegally rigged - and then walked across - a tightrope between the Twin Towers of the World Trade Center.

This book is so fascinating! All about Philippe Petit's plan and then his walks/dancing/rests on a wire between the Twin Towers in 1974. Also see the new film Man on Wire.

High wire artist Philippe Petit has performed - clandestinely or by invitation - for 35 years on five continents. In addition to writing about his art, he gives lectures on creativity and motivation, draws, performs close-up magic, practices the art of lock-picking and eighteenth-century timber framing, play chess, and studies French wines. He has been arrested more than five hundred times for street-juggling. He divides his time between the Cathedral Church of St John the Divine in New York City where he is an Artist-in-Residence, and a hideaway in the Catskills Mountains. In 2008, To Reach the Clouds was made into a major film called Man on Wire, directed by James Walsh.

There are no ages for this title yet.

There are no notices for this title yet.