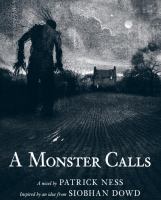 The monster comes at 12:07. It would probably be easier for everyone, the monster included, if Conor were afraid of it, but he isn’t. Conor’s afraid of much worse things at the moment. His mom has cancer and this time the treatments don’t seem to be working as well as they have in the past. He’s plagued by a nightmare so awful he believes that no one else ever need know of it. Bullies at school pound him regularly, his grandmother is annoying, and his dad lives with a different family in America. The crazy thing is that Conor kind of wants to be punished, but the monster has a different purpose in mind. It’s going to tell him three stories and when it’s done Conor will tell him a fourth. A fourth that is the truth and also the last thing he’d ever want to say.